The cradle of wine

In the mid-2010s, archaeologists investigating two Neolithic villages called Gadachrili Gora and Shulaveris Gora found eight earthenware jars containing residual wine compounds. Some of the jars were decorated with the images of grape clusters and a dancing person. 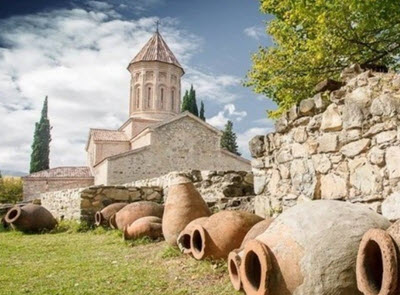 Dating revealed that the findings were approximately 8,000 years old, making this the oldest evidence of wine in the whole world. The oldest of the eight jars was dated to circa 5980 BC.

Gadachrili Gora and Shulaveris Gora are located roughly 50 km south of Tbilisi, the capital of Georgia, which means that the oldest known wine is from this little country, nestled on the brink of the Black Sea, in the borderlands where Europe meets Asia.

“We believe this is the oldest example of the domestication of a wild-growing Eurasian grapevine solely for the production of wine,” said co-author Stephen Batiuk, a senior researcher at the University of Toronto, when the report about the findings was published in the journal Proceedings of National Academy of Sciences (PNAS) in 2017. “Wine is central to civilisation as we know it in the West. As a medicine, social lubricant, mind-altering substance and highly valued commodity, wine became the focus of religious cults, pharmacopoeias, cuisines, economies and society in the ancient Near East.”

Throughout the centuries, the pottery tradition in Georgia has been very rich in wine vessels of various sizes, shapes and designs.

One of the most well-known Georgian containers for wine making is the kvevri, also known as churi. This is a large earthenware vessel used for fermentation, storage and ageing of Georgian wine. The smallest kvevris have room for roughly 20 liters, while the biggest ones hold up towards 10,000 liters. Most common are kvevris for circa 800 liters. Kvevris are egg-shaped and have no handles. The inside is coated with beewax. After being filled, the kvevris are either placed on the floor of a wine cellar or buried in the ground.

In Georgia, wine has traditionally been consumed both out of pottery and from skin-vessels and animal horns. The skin-vessels are usually made from the skins of domesticated herding animals. The drinking horns, known as kantsi, are boiled, cleaned and polished before being used for for wine.

Since wine making and wine drinking are such important aspects of Georgian culture, it comes as no surprise that wine also features strongly in Georgian art. Among the surviving gold, silver and bronze artifacts from the third and second millennia BC found in Georgia, many are adorned with chased imprints of grape clusters, grape vines and grape leaves.

If you visit the State Museum of Georgia, you can for instance see a 2nd millennium BC high-carat gold cup set with gems that is a great example of this tradition of incorporating wine and grapes in Georgian art. Considerably younger is the cameo depicting Dionysus; it has been dated to Classical antiquity, i.e. the period between the 8th century BC and the 5th or 6th century AD. Dionysus is the Greek god of grape harvest, wine-making, wine, ritual madness, theater, and fertility. The Romans called him Bacchus.

On display in the museum are also several sarcophagi with wine pitchers and ornamented wine cups that were once buried in tombs. 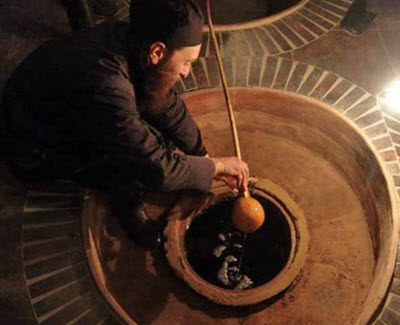 When Georgia became Christian country in the 4th century AD, a new aspect of the importance of wine was added to the culture, since wine is used for Holy Communion.

Also, according to legend, Saint Nino bore a cross made from vine wood. Nino (c. 296 – c. 338 or 340) was a Greek-speaking woman who came as a Christian missionary to Kartli (now Georgia), eventually converting the Georgian queen Nana and King Mirian III. Saint Nino is one of the most venerated saints of the Georgian Orthodox Church and her attribute, the grapevine cross, has become a symbol of Georgian Christianity.

During archaeological excavations in the city of Vani in the Imereti region of western Georgia, a 7th century bronze statue depicting a tamanda was discovered. A tamanda is a Georgian toastmaster at supras (feasts) and other big celebrations. A tamada is expected to empty his glass on each toast, but without becoming noticeably drunk. Copies of this statue are now a popular Georgian souvernir, especially among oenophiles.