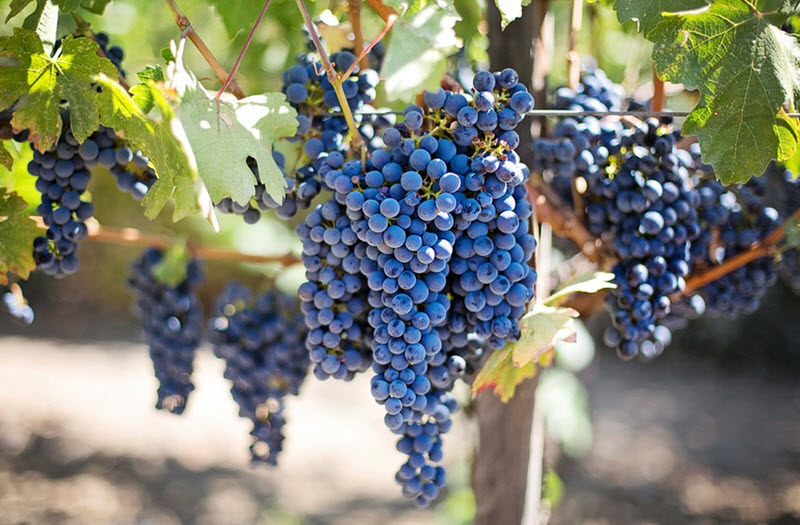 Many of the grape varieties grown in Georgian vineyards are still largely unknown to wine drinkers outside this part of the world.

One of the most common grapes in Georgian red wines is the Saperavi grape. In Georgian, the name means paint / dye / give color. Saperavi is native to Georgia and is used for many of the country’s most well-known red wines. Being a hardy variety, it can handle cold weather well and survive at high altitudes in regions such as Kakheti, the part of Eastern Georgia where this variety is believed to have first appeared. Today, Saperavi is grown in many different parts of the country.

Depending on the type, Saperavi grapes can be round or elliptic. The grapes are medium to large, thin-skinned and dark bluish. The maturation period is approximately five months.

Even though Separavi is strongly associated with Georgia and a few other former USSR republics, small quantities of this grape are actually grown in the Niagara and Finger Lakes regions in New York State, USA, and in Victoria’s King Valley Region in Australia.

Here are a few suggestions if you are interested in trying a Saperavi wine from Georgia:

Rkatsiteli yields noticeably acidic, balanced wines with spicy and floral notes in the aroma. Since these grapes are so naturally acidic, they are normally picked late in the season to allow for extra sweetness to develop. Harvesting in mid October is common.

The Rkatsiteli grape originates in Georgia, but nowadays, Rkatsiteli grapes aren’t just grown in here; they are fairly common in several wine producing countries that used to be a part of the Soviet Union. During the Soviet period, Rkatsiteli grapes were used to create everything from table wines to liqueurs and fortified wines similar to Sherry. The sweet dessert wines from Kakheti in Georgia were famous, and consumed in the same manner as port wine.

Rkatsiteli is still strongly associated with the former USSR, but small-scale cultivation has been set up in a few other spots as well, including vineyards in Australia, United States and China. In the United States, Rkatsiteli is grown in Virginia, North Carolina, California, Colorado, New Jersey, and New York State (Finger Lakes region). In China, the grape is called Baiyu.

In Georgia, Mstvane is often blended with Rkatsiteli, since Mstvane brings a lot of fruitiness and aroma. In Georgian, the word mtsvani means new, young and green.